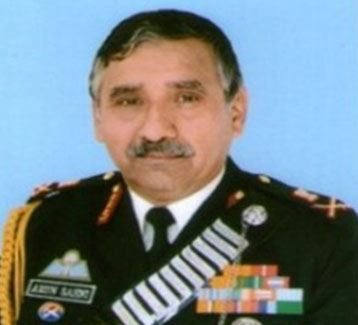 Lt Gen Arun Kumar Sahni is a decorated scholar–soldier, with 40 years of commissioned service in the Indian Army. In his last assignment, tenanting the second highest rank of the army, he was the General Officer Commanding-in-Chief of one of the six operational commands of the Indian Army.

His experience encompasses command and staff assignments, in the country’s most inhospitable and conflict affected areas to battle external and internal security challenges. He has displayed exceptional leadership ability to motivate his teams to achieve results far above expectations, be it along the disputed international borders against our neighbours or combatting insurgency in India and abroad.

Lt. Gen. Arun Sahni has an admirable track record of being a high achiever throughout his career, starting with the ‘Sword of Honour’ and President’s Gold medal on commissioning to the Army, in 1976. Among several awards for his exceptional leadership skills and courage, he has been decorated with the Uttam Yudh Seva Medal by the President of India which is the second highest medal for peace time gallantry. He has also been conferred the coveted Param Vishist Seva Medal, by the President of India, for sustained meritorious service.

Over 40 years, he has assumed many roles and duties. In addition to his Command assignments of leading military formations, he cherishes a few staff or capability or systems building appointments too. First, is the ‘Chief Operations Officer’ of an Infantry Brigade in Sri Lanka as part of Indian Peace Keeping Force (IPKF) and Colonel General Staff responsible for operations of a Counter Insurgency Force in Jammu & Kashmir. Second is the ‘Principal Staff officer’ at Army Headquarters, Delhi, responsible for force structuring, identification of weapons and equipment required for capacity building, training, cyber security and operation preparedness of the Indian Army. And third, is the ‘Director General Information Technology’ where he had to harmonize perspective plans for digitization and steered network enablement for the Indian Army. All three of them contributed greatly to honing different dimensions of his leadership – of human engagement, conflict resolution, management of complexities at various levels, managing stakeholders with diverse interests etc.

Contributing to the youth who will eventually lead our country has been a cause that is close to his heart. Towards this, he has been an Instructor at various Military Institutions within the country to impart basic & specialized training, not only to own officers, but also those from friendly foreign countries.
Lt Gen. Arun Sahni has actively participated and spoken at various seminars, conclaves and prestigious institutions/academic establishments such as the CII and YPO, on diverse subjects. An accomplished horseman and polo player, he has represented the country in Polo and Equestrian events at Jordan and Dubai.

He aspires to contribute meaningfully to all levels of society through experience sharing and formal interface at the operational, directional and strategic level with all kinds of organizations. He is mentoring start-ups and new initiatives that are in the domain of Information Security, Cyber and HR Management. He is an active participant with various think tanks within the country on a wide range of subjects, particularly the following: