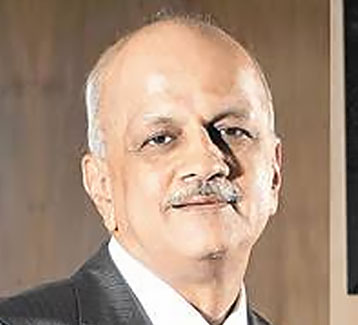 Chandrashekhar has been the Chairman of Telecom Commission and Secretary in the Department of Telecommunications in the Ministry of Communications & Information Technology, Government of India since September, 2010 till his retirement from Government service in March, 2013. Earlier, he served as the Secretary in the Department of Information Technology from June, 2009 to September, 2010 and also held concurrent charge of this assignment from February, 2011 to March, 2012 in addition to his current charge.

As the Telecom Secretary, he was responsible for driving several key policies and strategies covering licensing, spectrum management, National Broadband Plan, Convergence, Manufacturing, Investment, security, R&D and the National Telecom Policy 2012. He was the principal architect behind a triad of policies covering Telecommunications, Electronics and Information Technology that was unveiled in draft form by the Government of India in October, 2011. All the three policies were approved by the Government in 2012. The thrust of these policies is to optimally leverage Information and Communication Technologies to find innovative solutions in education, health care, financial inclusion, e-governance, skill development, employment generation, etc.

As the Secretary of the Department of Information Technology, he steered the formulation of national policies for the IT sector and for promoting Electronic System Design and Manufacturing and R&D in the Electronics and IT sector. He was also responsible for overseeing implementation of a number of major national initiatives in the sector including the National e-Governance Plan, which he played a key role in designing and in formulating the Electronic Service Delivery Act. Earlier, he established the first Department of Information Technology in the country in the state of Andhra Pradesh and was Secretary of the Department from June, 1997 to December, 1999. The policies and strategies he formulated catapulted the state to the forefront of the country in the sector and became a role model for several states and countries.

Born in 1953, Mr. Chandrashekhar received a M.Sc. degree in Chemistry from the Indian Institute of Technology, Bombay and a M.S. degree in Computer Science from the Pennsylvania State University, USA. He is widely travelled and has a unique understanding of cultural diversity, both within the country and across the world. He was conferred the Prime Minister’s Award for Excellence in Public Administration for the year 2007-08. He has been conferred several awards including Data Quest Path Breaker of the Year Award in 2005 and Distinguished Alumnus award of IIT-Mumbai in 2010.