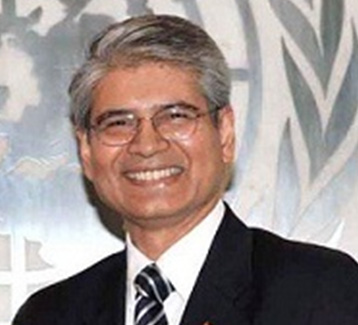 Ambassador Asoke Mukerji served in the Indian Foreign Service for more than 37 years, retiring as India’s Ambassador and Permanent Representative to the United Nations in New York in December 2015, where he led the negotiation of Agenda 2030 on Sustainable Development His tenure was marked by his leadership of the Indian team which implemented within 75 days and with 177 co-sponsoring countries Prime Minister Narendra Modi’s proposal to the United Nations to declare an International Day of Yoga. He has served in London, Moscow, Washington DC, Geneva and Dubai. He opened India’s first embassies in Uzbekistan, Tajikistan and Turkmenistan in 1992. He has been a trade negotiator for India in the World Trade Organization and represented India in 11 international trade disputes. He headed India’s multi-agency delegations for international cooperation on counter-terrorism with the five permanent members of the UN Security Council, and initiated India’s cyber dialogues with the United States, United Kingdom, Russian Federation and Japan. He was chair of a multi-stakeholder study group set up by the National Security Secretariat of India to recommend “Cyber Norms for India” in 2018. He has brought out seven books. The last one, “India and the United Nations: a Photo Journey 1945-2015” was presented by Prime Minister Narendra Modi to UN Secretary General Ban ki-Moon in September 2015.