Blockchain is a new paradigm of technological development.

As per Investopedia, a Blockchain is a digitized, decentralized, public ledger of all cryptocurrency transactions. Constantly growing as ‘completed’ blocks (the most recent transactions) are recorded and added to it in chronological order, it allows market participants to keep track of digital currency transactions without central record keeping. Each node (a computer connected to the network) gets a copy of the Blockchain, which is downloaded automatically.[1]

Gartner has described Blockchain as a type of distributed ledger in which value exchange transactions (in bitcoin or other token) are sequentially grouped into blocks. Each block is chained to the previous block and immutably recorded across a peer-to-peer network, using cryptographic trust and assurance mechanisms. Depending on the implementation, transactions can include programmable behavior.[2]

Blockchain is expected to be a game changer and would completely change various spheres of human activities. Blockchain is increasingly being used in a variety of applications in different sectors of the economy and society.

No wonder, it is predicted that The Blockchain Revolution Promises to Touch Every Industry.

It has been estimated that the global Blockchain market is expected to be worth $20 billion by 2024.The reported potential annual savings for banks utilizing Blockchain technology is $ 8-12 billion.[3]

The legalities of Blockchain are increasingly becoming important . That is the reason why Blockchain Law as a new discipline is beginning to emerge.

According to Dr. Pavan Duggal, internationally acclaimed authority and expert on Cyberlaw and Cyber Security Law, who is doing pioneering work in the area of Blockchain legal issues, Blockchain Law refers to the study of law, which examines the complicated legal, policy and regulatory issues concerning the digitized, decentralized, distributed public ledgers or blocks and the data and information stored thereon as well as their interplay with human and automated activities and conduct. 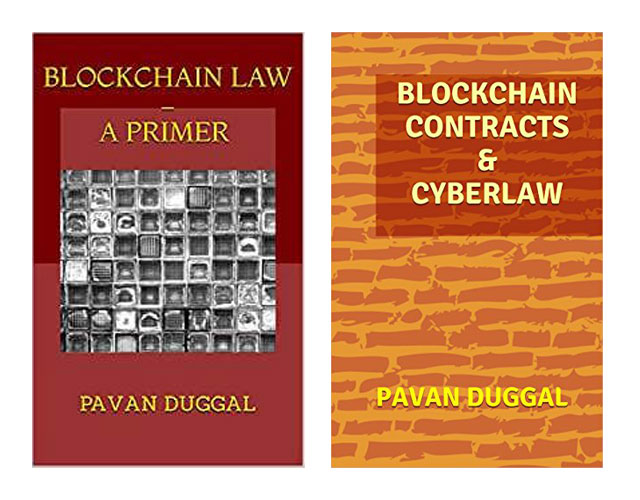 His two seminal books, “Blockchain Law- A Primer[4]”  and ” Blockchain Contracts and Cyberlaw[5]” elaborate the basic principles of law, on which the discipline of Blockchain Law is likely to develop.

Techradar.com refers to Blockchain Law as the new cutting-edge for digital law.[6]It will be sometime before  Blockchain Law completely crystallizes as a mature legal discipline.

Blockchain law Epicentre seeks to be the nerve centre of all evolving jurisprudence concerning Blockchain technology. It has the following objectives:-

Blockchain Law Epicentre would aim to engage in the following kinds of activities:-