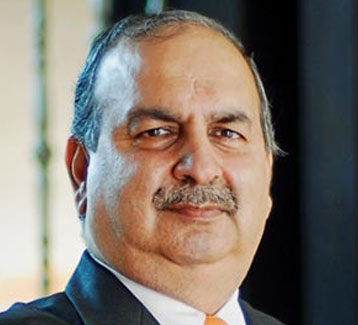 Mr. Rajesh Uppal is the Executive officer (EO) – IT and CIO of Maruti Suzuki India Ltd. Maruti Suzuki India Limited, a subsidiary of Suzuki Motor Corporation of Japan, has been the leader of the Indian car market for more than two decades. In recent years, Maruti has made major strides towards its goal of becoming Suzuki Motor Corporation’s R&D hub for Asia. Maruti’s contribution as the engine of growth of the Indian auto industry, indeed its impact on the lifestyle and psyche of an entire generation of Indian middle class, is widely acknowledged.

Mr. Uppal overseas the IT infrastructure and applications for Maruti Suzuki India Ltd. Maruti embraced IT right at its inception. Over two decades later, it is embedded in its most critical processes, helping India’s leading carmaker stay ahead of rivals, and race towards its goal of producing a million cars annually by 2010.The IT deployment at Maruti is widely recognized as a benchmark for other manufacturing companies in India to meet. The IT team at Maruti, which Mr. Uppal heads, has numerous firsts to credit including the MS Exchange, Sharepoint Portal, Vehicle Tracking System implementations, Hosted Dealer Management System. The IT systems have played a key role in enabling Maruti to enhance the efficiency and flexibility of key business Processes. Under his able guidance, the IT infrastructure at Maruti is not only focused on improving Internal efficiencies but has also looked to enhance the value across the supply chain, be it in terms of deploying extranets or a centrally hosted Dealer Management System, MSIL has been the leader in using technology for improving visibility and efficiency across the value chain.

Mr. Uppal’s association with Maruti began in 1985, when he joined the IT team as an executive and was responsible for the initial adoption and evolution of the IT systems at Maruti. During his long career with Maruti, he has successfully established IT as a critical business function that he heads today as the CIO since 1998. As an extended responsibility Mr. Uppal also lead Sales Dispatch planning of Vehicles for 2 yrs.

Prior to joining Maruti, Mr. Uppal worked with the IT department of Bharat Heavy Electricals Ltd, India’s leading heavy electrical equipment manufacturer. Mr. Uppal is a Graduate in Mechanical Engineering from Punjabi University.