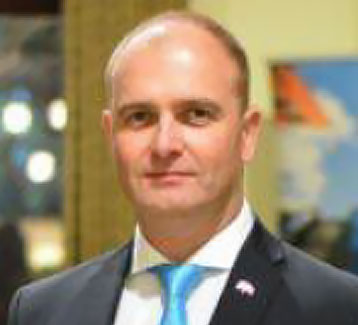 H.E. Mr. Riho Kruuv is the Estonian Ambassador to India Myanmar and Singapore, and Ambassador Designate to Sri Lanka and Malaysia. Prior to this assignment, Ambassador Kruuv held several high ranking positions in the Estonian Ministry of Foreign Affairs, in the Security Policy and Arms Control Division, Political Department and as Chair of the Estonian Export Control Authority.

He has also served as the Charged Affairs at the Embassy of Estonia in Canada and as 1st Secretary at the Estonian Embassy in the United States of America.

Ambassador Kruuv has a Master of Arts Degree in International Commerce and Policy from George Mason University in USA, a Bachelor of Business Administration from University of Tartu in Estonia and is a Graduate of the Estonian School of Diplomacy.

Ambassador Kruuv is married and has two children.