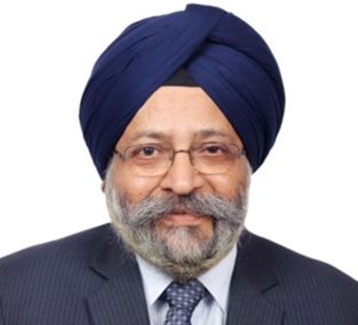 Mr. Rupinder Singh Suri, Senior Adocate, was the President of the Supreme Court Bar Association in 2017, which consists of over 14,000 advocates & has been the President of the Supreme Court Advocate-on-Record Association between 2004- 2006. He has also held the position of Secretary General, INSOL India and is an active member of International Bar Association. Mr. Suri has been appointed as the national representative of India, with effect from 2019, at the recently concluded global conference hosted by the UIA (International Association of Lawyers) at Porto, Portugal.

Qualified with degree of masters in Economics from St. Stephen’s College, Delhi University and after studying law at Campus Law Centre (Faculty of Law), he enrolled with the Bar in 1973 and founded Suri and Company, Law Firm in 1984. Mr. Suri has been regularly handling diverse legal matters for the Central and State Governments. He has represented various Government and Public Sector Undertakings, in diverse fields such as railways, water disputes, energy, banking etc. In recognition of his contributions and expertise, he was designated as Senior Advocate by the Hon’ble Supreme Court of India in 2009.

Mr. Suri was instrumental in developing the retail banking litigation set-up for Citibank in the 1980’s- a model, which has been adopted and followed till date by all Multi-National and Private Sector banks in India. He is deeply proficient in Civil Laws, Corporate Laws, M&A’s, infrastructure, energy and insolvency laws and has represented numerous leading Multi-National Corporations across the various judicial fora in India. Mr. Suri is also considered one of the leaders in Domestic and International Arbitration and ADR, especially in commercial disputes.

Considered as an expert in Commercial and Banking Laws, Mr. Suri has been regularly advising banks, financial institutions and other public and private entities, specifically on the numerous issues that have arisen since the Right to Privacy and Aadhaar judgments.