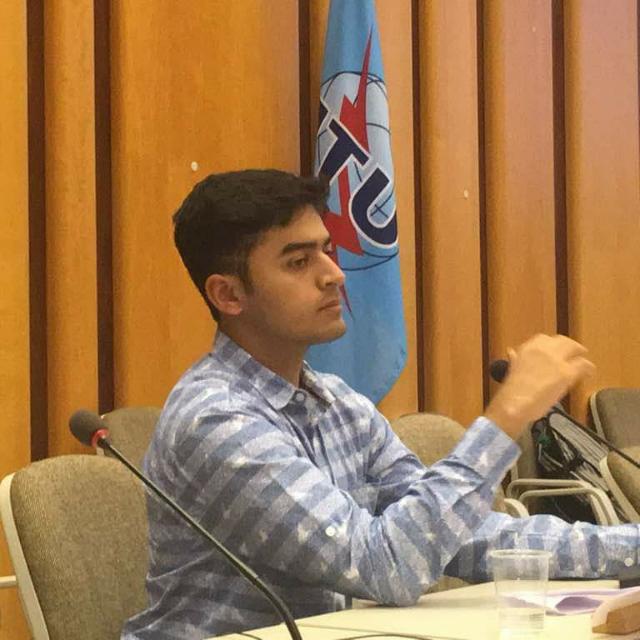 Saakshar Duggal is the Youth Coordinator of Center Against Cyber Bullying (CACB).  Saakshar has been working on cutting-edge areas pertaining to cyber bullying in particular and cybercrime in general and their prevalence amongst youth and teenagers.  He has addressed various students and children of different aspects of cyber bullying and connected legalities.

Saakshar was a distinguished speaker at  the International Conference on Cyberlaw, Cybercrime & Cybersecurity 2014 held at New Delhi on 20th November, 2014, and spoke on  the subject of Cybercrime amongst youth.

Saakshar Duggal was a speaker the International Conference on Cyberlaw, Cybercrime & Cybersecurity 2015 which took place on 19th November, 2015 at New Delhi. He addressed the said Conference on the subject  Social Media, Children, Cyber Bullying  & New Challenges.

In addition, he also participated in the Round Table on Cyberlaw, Cybercrime & Cybersecurity, held on 27th May, 2016 at New Delhi.

Saakshar Duggal was an eminent youth speaker on the subject Cyber Bullying at the International Conference on Cyberlaw, Cybercrime & Cybersecurity 2016 which took place on 17th & 18th November, 2016 at New Delhi.

Saakshar Duggal was a distinguished speaker at the Thematic Workshop entitled “Cyberlaw, Cyber Security Law, Internet of Things and Emerging Global Trends” held on 12th June, 2017 during the ITU WSIS Forum 2017 at Geneva, Switzerland, hosted by International Telecommunications Union, UNESCO, UNDP, UNCTAD, UNICEF. He spoke on the emerging challenges concerning cyber security and cybercrime being faced by the youth of the world in general and India in particular.The said Thematic Workshop was organized by Pavan Duggal Associates, Advocates.

Saakshar Duggal was also a Speaker at 2018 & 2019 versions of the International Conference on Cyberlaw, Cybercrime & Cybersecurity held at New Delhi.

Saakshar Duggal addressed the members of the Malaysian judiciary at the session on ground position of cybercrimes in India at the special one-day training on Special Cyber Court held at Kuala Lumpur, Malaysia in July, 2016.

Saakshar has given numerous talks in various schools in India on how children and teenagers can protect themselves from the ill-effect of cyber bullying. Saakshar also features in various TV programs on cyber bullying in different Indian TV channels.

Saakshar Duggal is a fourth year Student of Law and Intern at Pavan Duggal Associates, Advocates, Supreme Court of India.

He has done his school studies from Springdales School, Dhaula Kuan, New Delhi.